We have to stay some days waiting to get the watermaker fixed.

After new year we headed south, crossing back to St Lucia. After a quick stop in Rodney Bay catching up with more friends we went on south to Anse Cochon and Soufriere. Nice snorkelling in Anse Cochon and Bat Cave, interesting watching local fishermen early in the morning, one person jumps in with a snorkel and mask to locate the fish, they drop the net in a circle while others throw stones into the water to scare fish into the net. Then back to Rodney Bay for Andrews last night (pizza at Elena’s), next day we saw him off to the airport in the taxi with a large chicken roti for sustenance. He has been with us for 6 weeks, has been in 4 different countries with stamps in his passport to prove it (except Martinique) and we’ve sailed 341 miles including one night sail.

Next we watched the start of World ARC 2020 from the deck of our friends catamaran, Anne and Norman on Glorious Daze, quite spectacular and we do know 3 of the boats. Then spent time trying to fIx the wind generator and ended up buying a new one. Finally able to leave to sail to Marin in Martinique and catch up with Glorious Daze again. Brian on his Amel Maramu Jamesby ( who was in the next berth in Rodney Bay) overtook us en route and took some nice pics of Timshel under sail, while I took some of Jamesby. It is nice to get photos of your boat under sail. 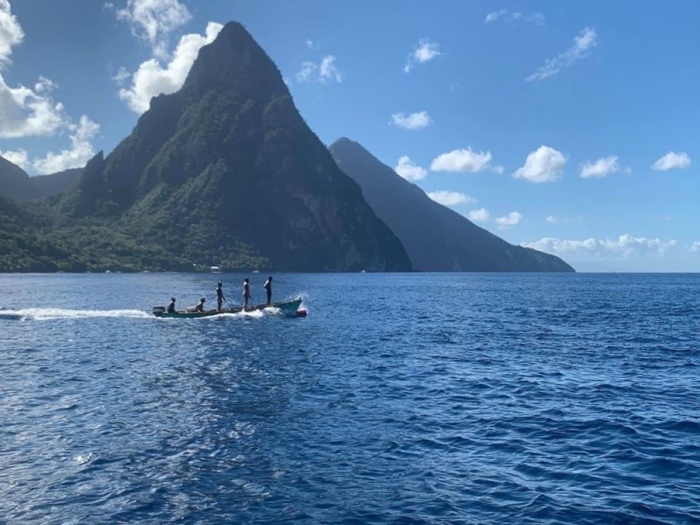 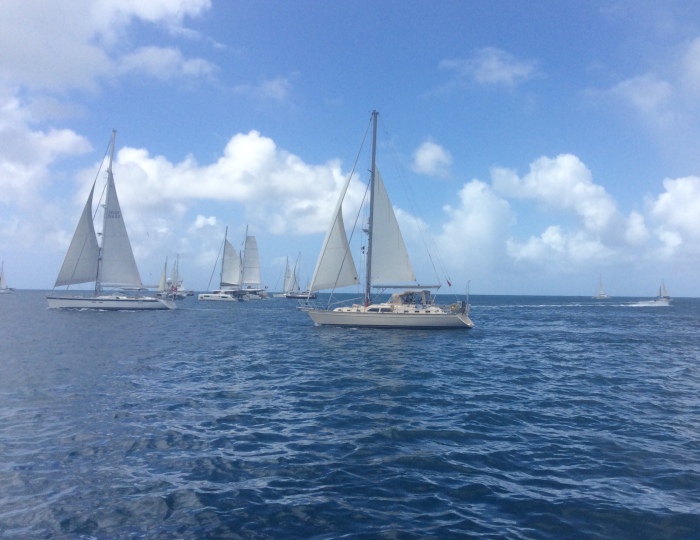 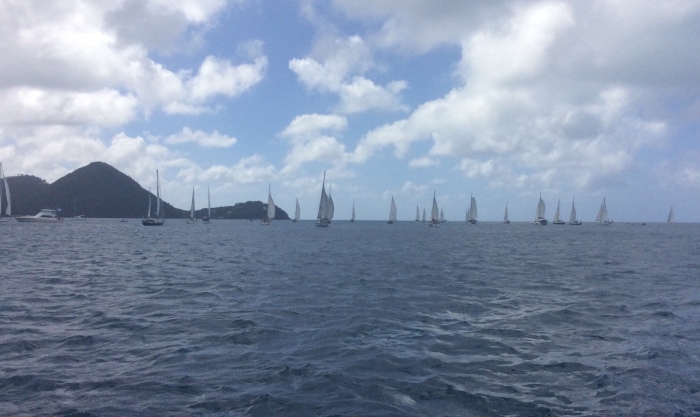 As soon as the ARC stuff was over we headed north to Martinique, which gave us time for a quick shopping trip to Marin to stock up on French bread, wine and cheese, also Jambon de Noel and other goodies for Christmas. Then on to Grande Anse d’Arlet for Christmas Day – we spent Christmas 2015 and 2016 here too. There are still turtles swimming about, good snorkelling and lots of boats. We sailed on round the coast to Fort de France the capitol. The anchorage is behind Fort St Louis, and this time we managed to get on a tour of the fort. Much of it is still an active Naval base. We returned to Fort de France for the New Year fireworks which strangely take place on the evening of December 30th. They are set off from the fort so in the anchorage (which by this time was very full and small boats were buzzing around everywhere) we had a ringside view. I don’t think I’ve ever seen a more spectacular display. On the 31st we went on to St Pierre at the north end of the island. This was the capital that was destroyed in 1902 by the eruption of Mont Pelee killing something like 28,000 people. One man survived in the town jail. Only one ship of the many anchored in the bay managed to get away with only half the crew alive, the rest were sunk. We looked at the ruins and went round the museum which has been recently refurbished and is very good. The restaurants seemed to be closed so we saw the new year in on Timshel. The church bells rang out at midnight and we contributed our foghorn and Auld Lang Syne (that Andrew was streaming on Spotify). 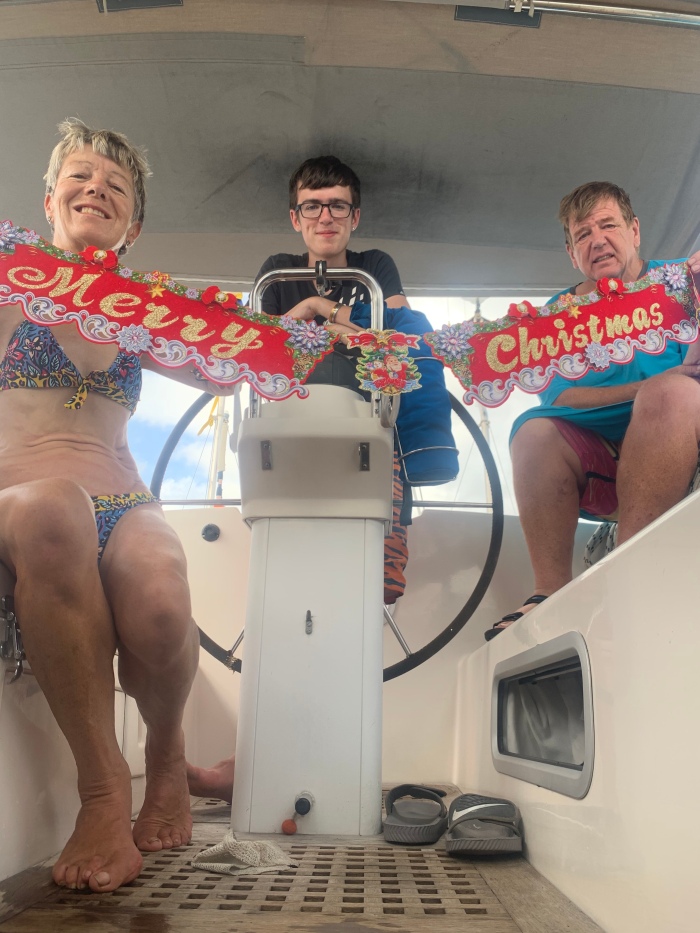 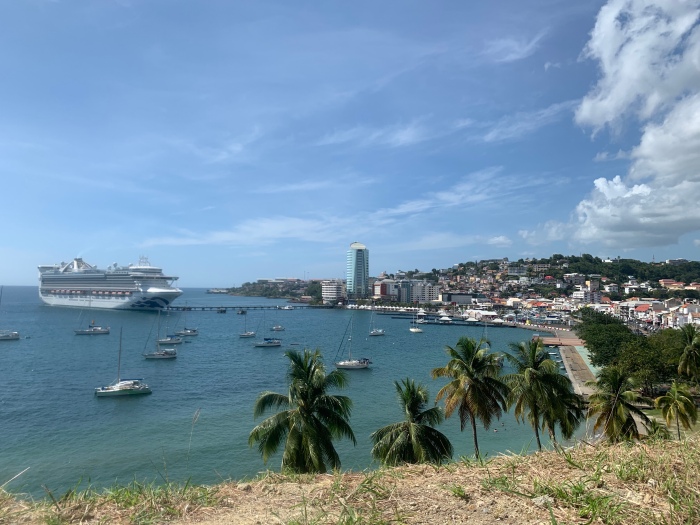 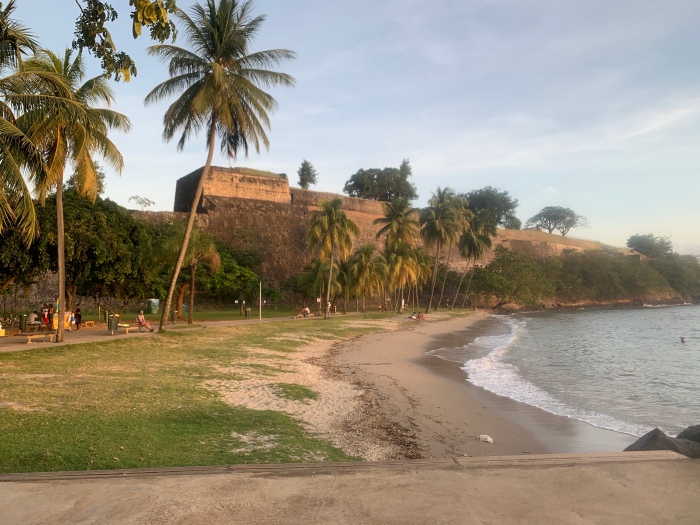 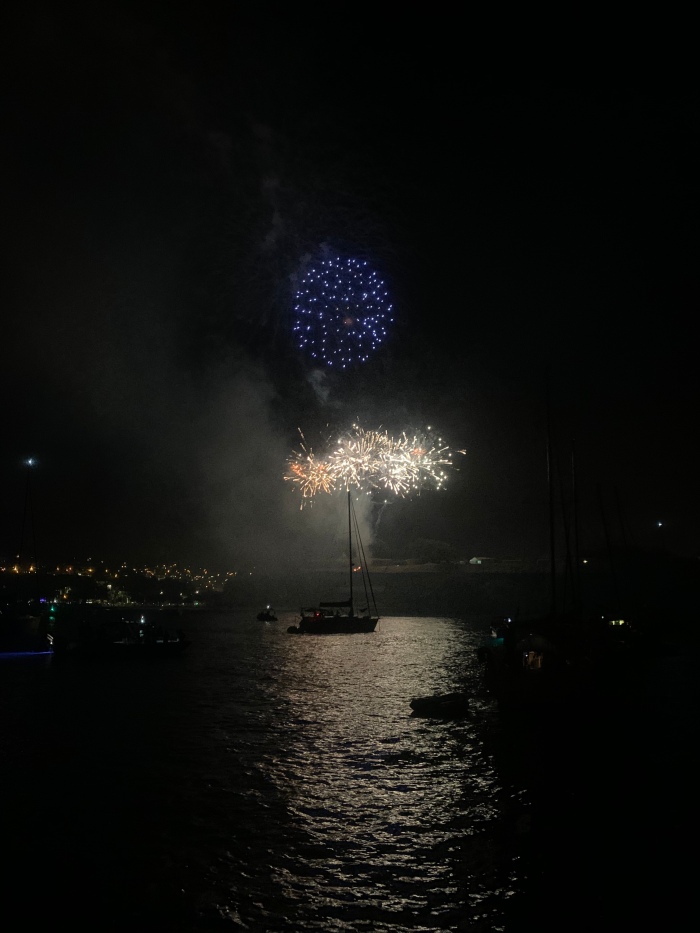 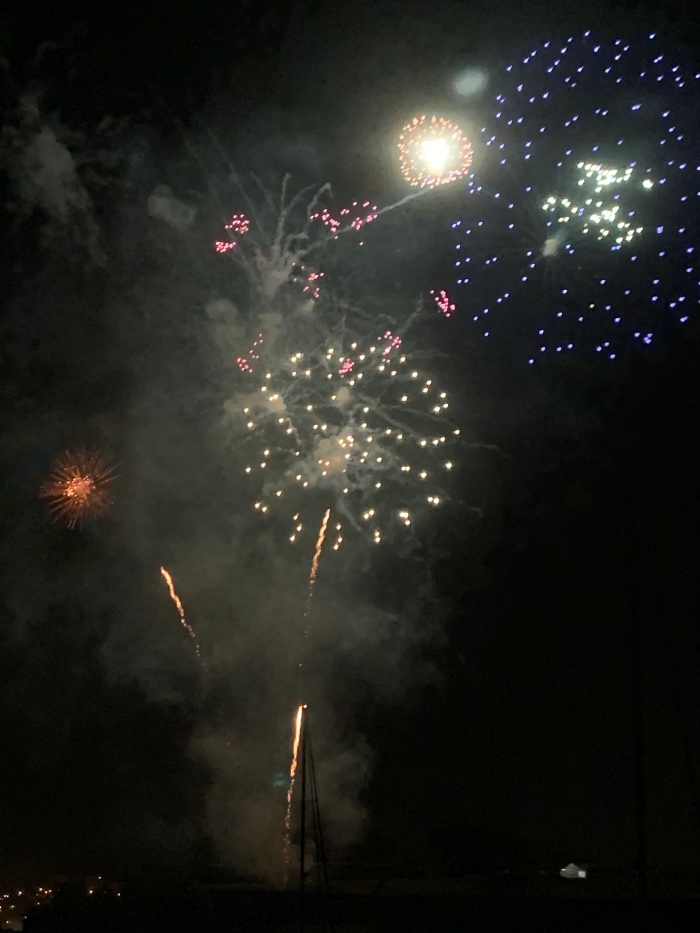 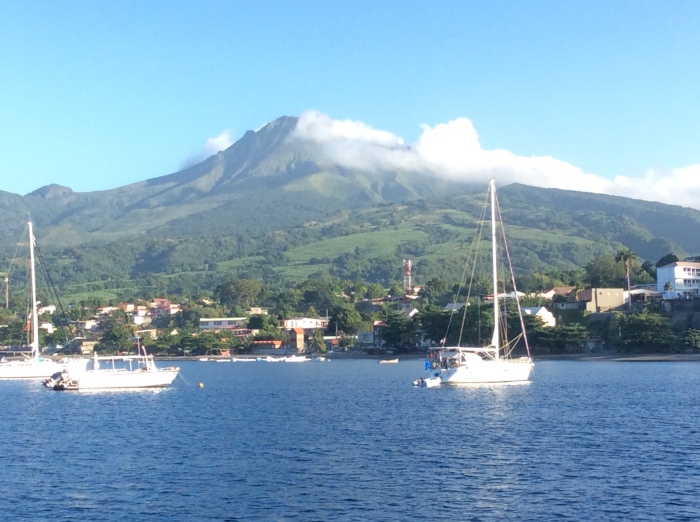 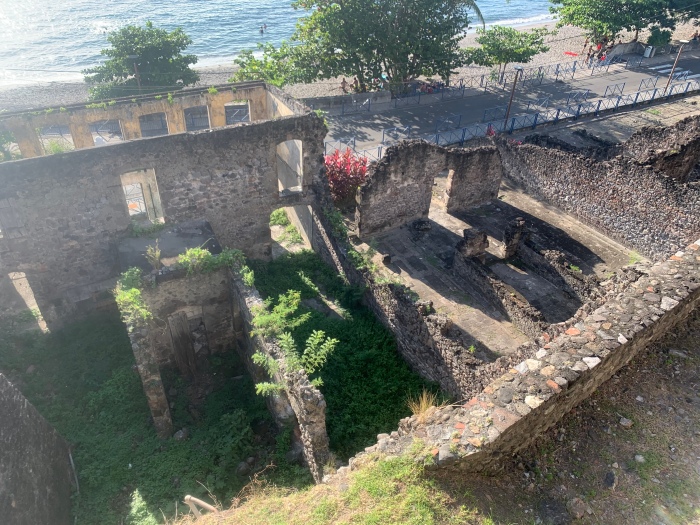 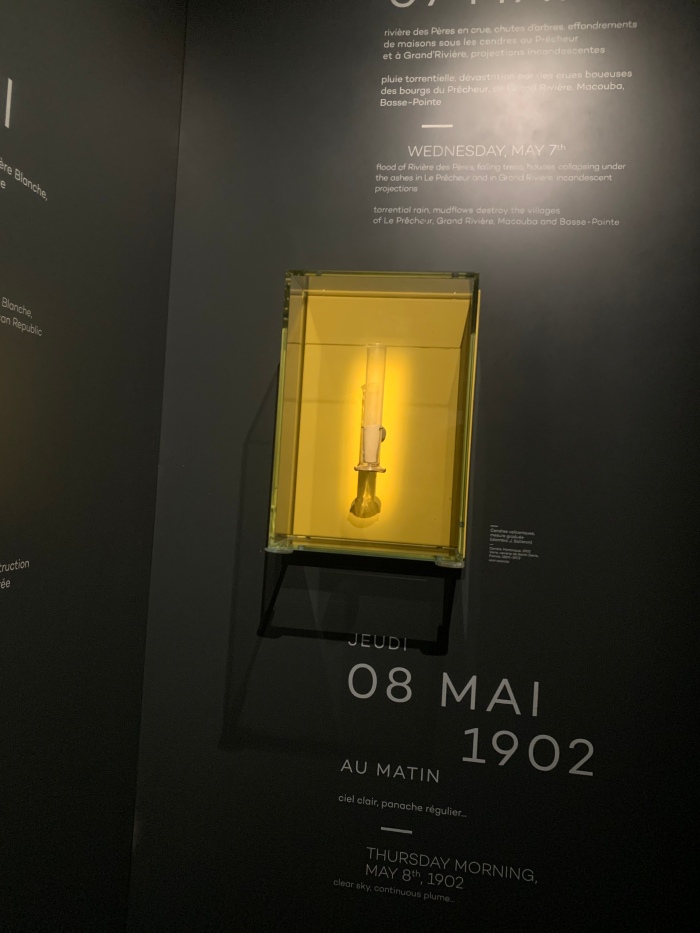 Nephew Andrew had arrived in Grenada on 30th November to join us for 6 weeks. We managed a trip to the Grand Etang Forest National Park where there are Mona monkeys (Andrew is the one with the glasses). Also a ride on a very speedy local bus into St George’s the capital before we set sail for Secret Harbour, then St George’s. Also on Andrew’s bucket list was visiting Grande Anse beach. We sailed on to Cariacou then Union Island so we left Grenada and checked into St Vincent and the Grenadines. More stamps for Andrew’s passport. Unfortunately the weather was not very nice when we got to Tobago Cays, still beautiful and lots of turtles but we didn’t get our barbecue dinner on the beach due to torrential rain. It was much nicer at Bequia, then we made a night passage to St Lucia. Back in Rodney Bay again we did finish line duties for the ARC 2019 rally, which was fun and meant we got a free berth in the marina for a few days and got to go to the parties and catch up with lots of friends who had crossed just the Atlantic again with the ARC. 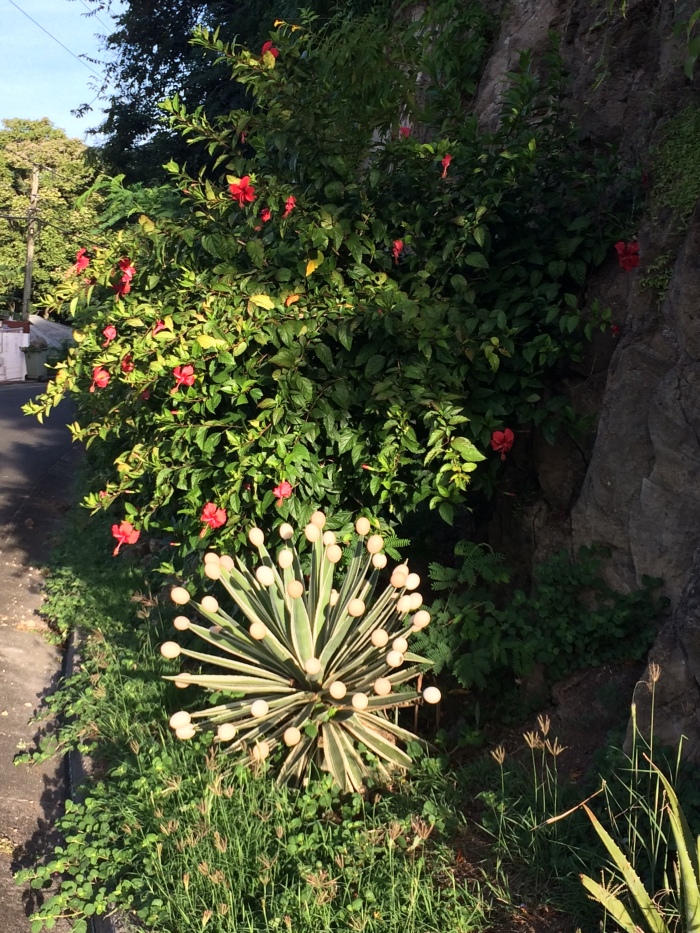 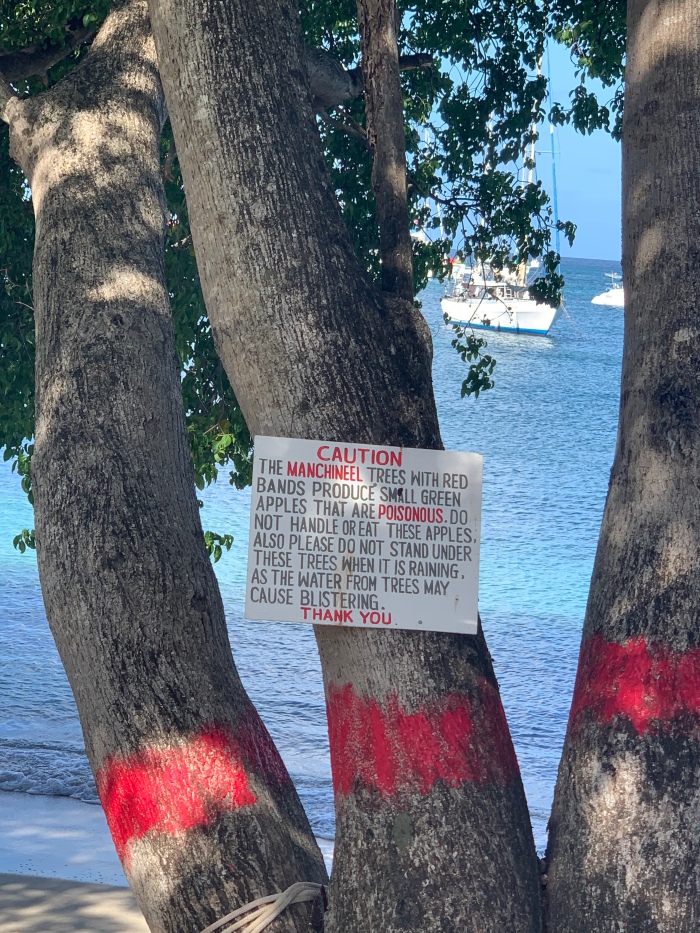 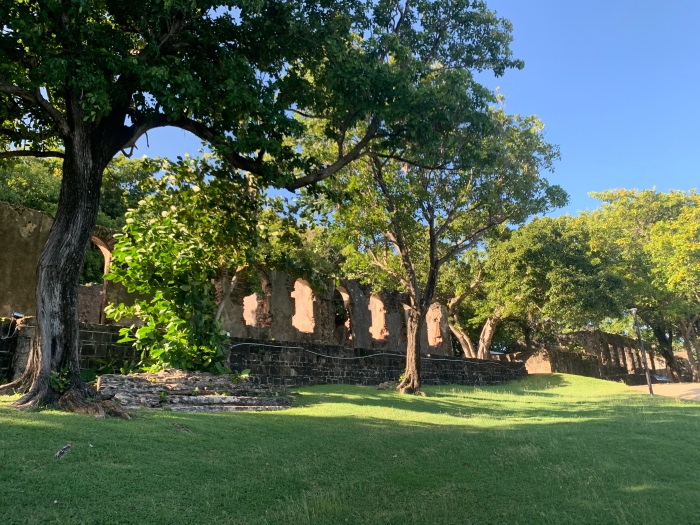 We arrived back in the Caribbean on 2nd November, hot hot hot! In fact Grenada had had storms and an incredible amount of rain the previous month which had trashed a lot of the pipework to the reservoir so there was a water shortage, and no tomatoes. Some work had been done on Timshel in our absence but there was still much to do, so we worked hard. We stayed in a small apartment at Sydney’s Place, just up the road and run by the formidable Dona. Timshel was relaunched on 22nd November as planned but unfortunately we found that the stern gland was leaking so we had to get lifted again (this time with the humongous travel lift) at great expense next day to get it replaced. Then we found the seacock or the watermaker had jammed shut so that had to be replaced with a diver holding a sponge covered with cling film over the intake. All in all, all a slow start. 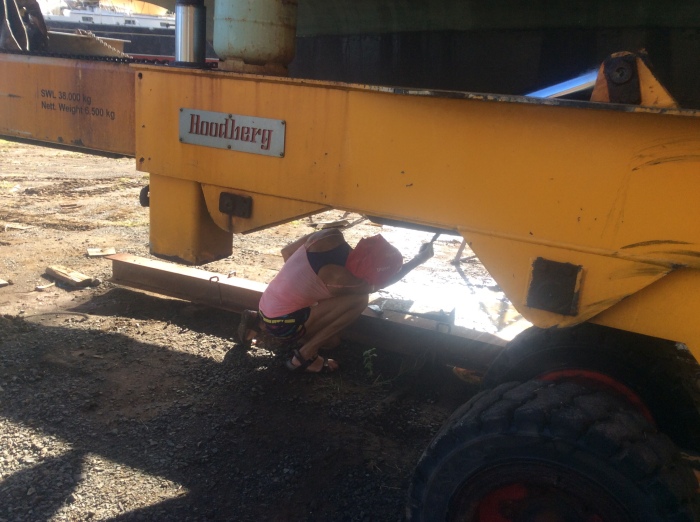 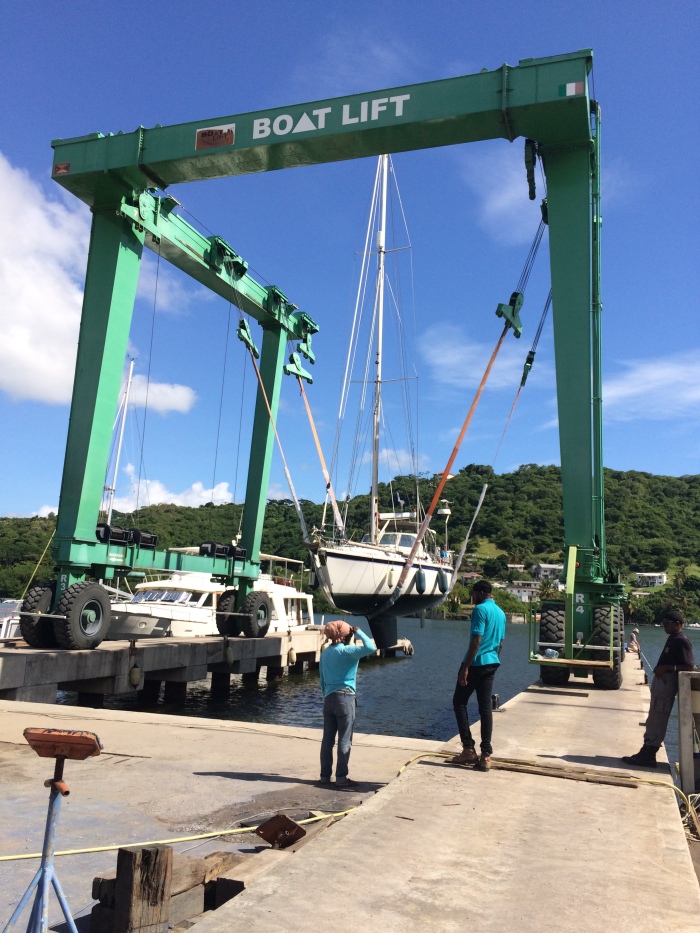 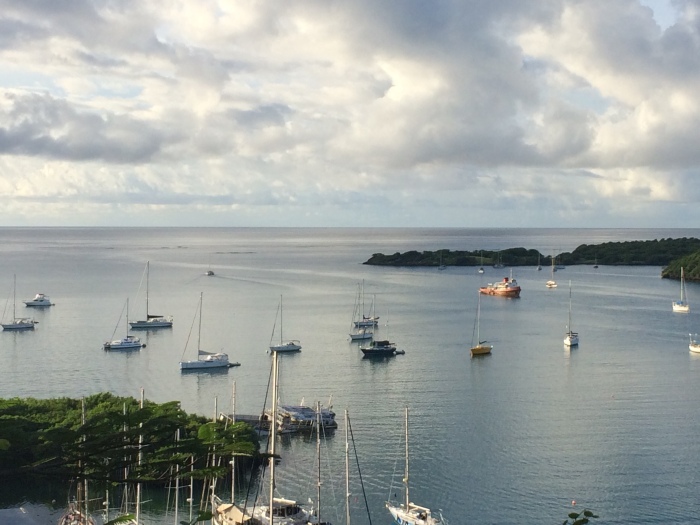 Much delayed blog. We arrived back in Grenada via Union Island and Carriacou at the start of June. We visited the Grenada Chocolate Festival with friends Anne and Norman from Glorious Daze while moored in Prickly Bay, spent about a week anchored in Clarke’s Court Bay, and Timshel was hauled out on the trailer at Clarke’s Court on 11th June. It’s a little strange being back – we were last there for the 2016 hurricane season and we and Timshel have travelled a long way since then. There have been changes, but much is still the same.We worked hard for the rest of the week packing away Timshel. As before we stayed in a small apartment at Sydney’s place up the road, there are too many mosquitos to stay on the boat in the yard. 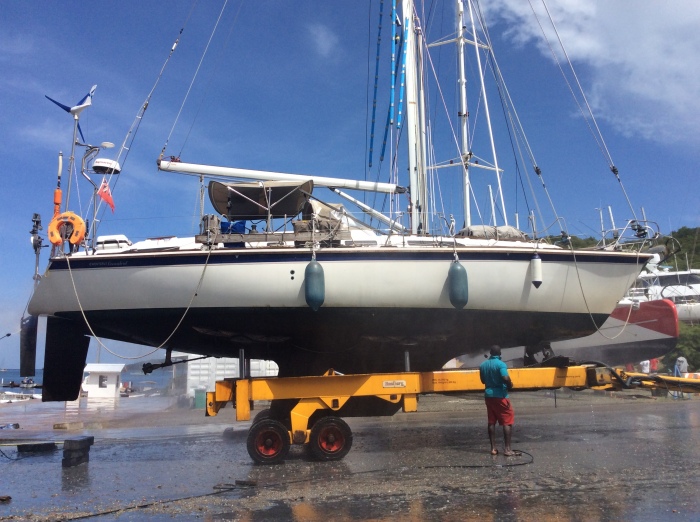 Another new island for us. Of course Mustique is known as the playground of the Rich and famous, think Mick Jagger or Princess Margaret, all started by Colin Tennant (Lord Glenconner). There are 90 or so exclusive luxury villas on the island, some of which can be rented, but they do allow passing yachts to visit. There are secure buoys in Britannia Bay, which seem expensive but your 210 EC $ does cover you for 3 days. Everywhere is very clean and well tended, the water is beautifully clear, great snorkelling straight from the boat, lots of turtles. There are several good walking trails on the map we got from the library. As well as visiting Basils Bar, we climbed up to the local village to an establish,met called The View to have lunch. And what a superb view looking out over the bay and the anchorage. Service was not speedy so plenty of time to enjoy it and a beer cost the same in in EC$ as it would in US $ at Basils. Having parted from our rally mates from World ARC we started flying our Ocean Cruising Club burgee, and have been impressed by how many fellow members have met, including Davina and Antony on Divanty in Mustique. 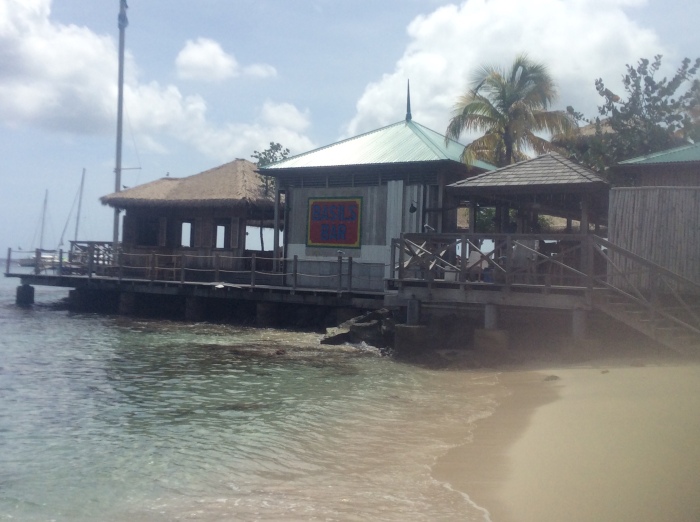 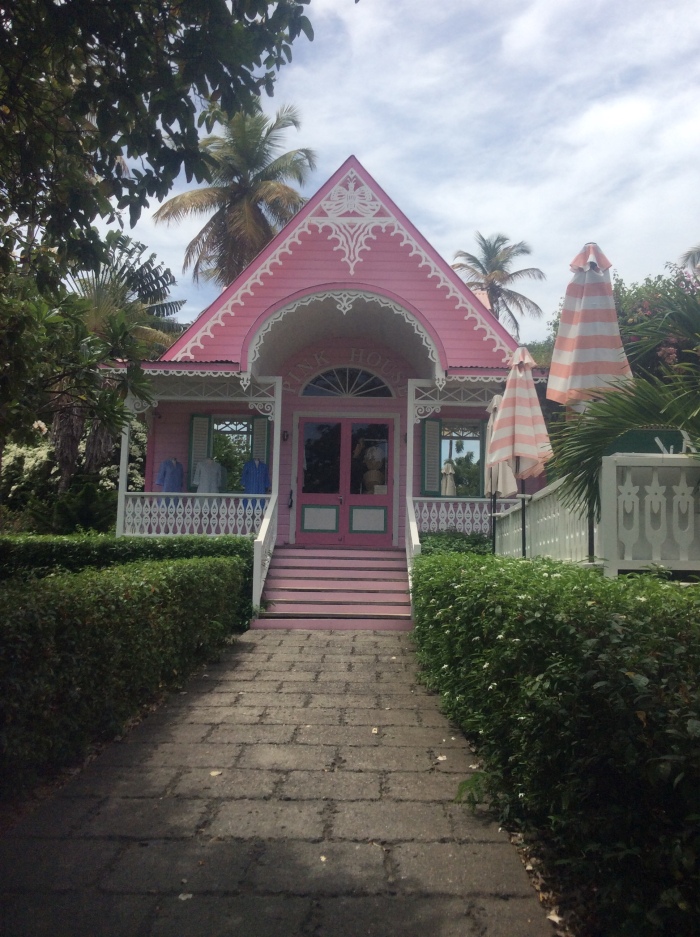 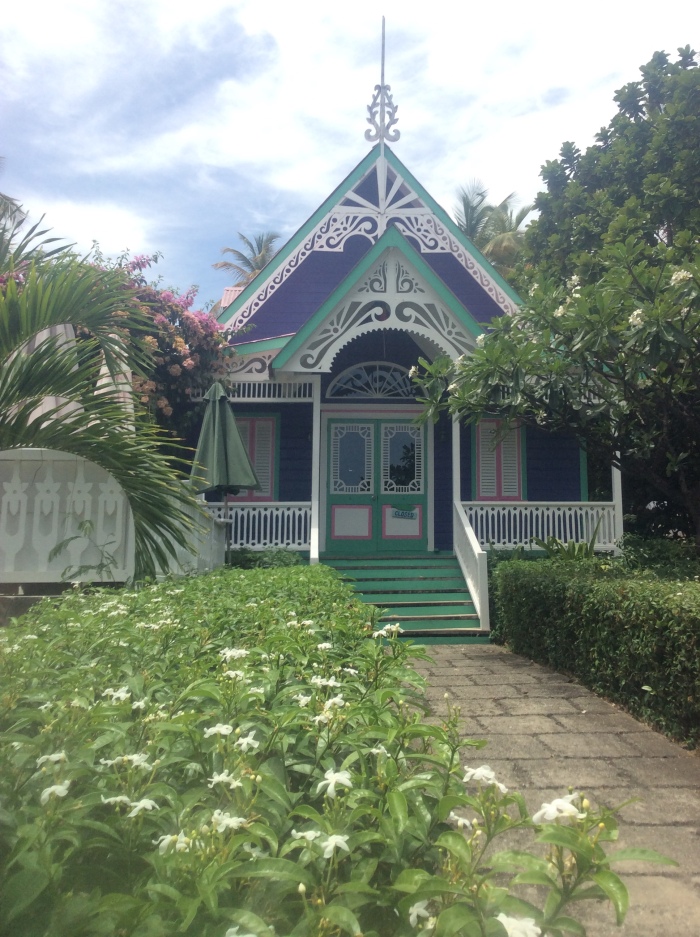 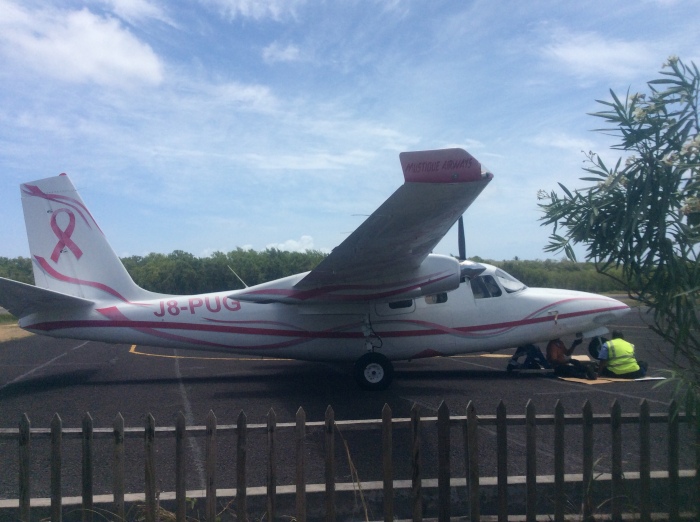 After the very interesting visit Montserrat we need to make progress south so we quickly sailed on past Guadeloupe and Dominica, stopping for shopping at Fort de France Martinique and for a couple of days cleaning the boat alongside at the Marina at Rodney Bay. If you start at 6 am its amazing what progress you can make in a day.

Photo shows the last look at the Pitons for the year. 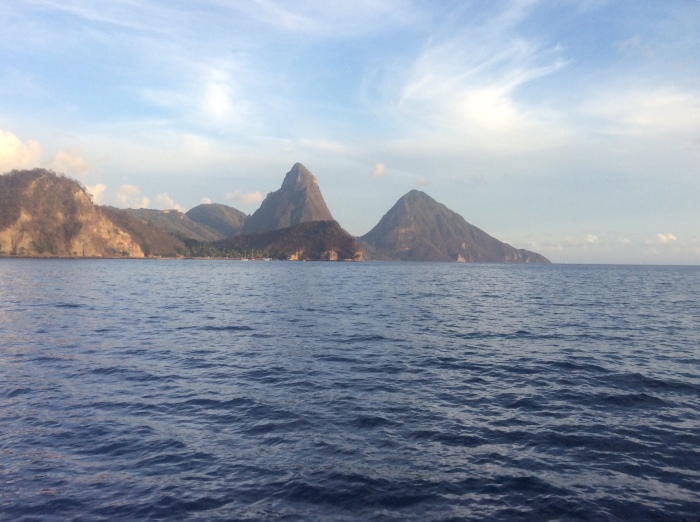 It was a hard and lumpy beat cum motorsail from Nevis to Montserrat, it took all day to do the 30 miles or so. We anchored off the town at the Port of Entry, Little Bay along with catamaran Glorious Daze (USA) who had stopped due to gear failure. Montserrat is a British Overseas Territory; the island was first discovered by Columbus in1493. The first European settlers were Irish, including political prisoners after the defeat by Cromwell and the Irish influence is reflected in place names and surnames of current inhabitants. It is referred to as the Emerald Isle, partly due to the vegetation. It is now most famous for the Soufriere Hills volcano which after being quiescent for 400 years erupted in spectacular fashion on 1995, and continued to do do on and off until 2011. We had arranged by email to do a “Volcano Tour” with guide/driver Joe Phillips, who came highly recommended in the Doyle and also by friends Wendy and Dave of Mischief. Joe brings the whole thing alive and imparts a wealth of information with his enthusiasm and his collection of photos from before the eruption. We persuaded the two crew of Glorious Daze to join us on the tour, thereby making new good friends in Anne and Norman. We visited the Volcano observatory and the exclusivo zone at the south end of the island including the old capital, Plymouth. The people were moved out of the south part in 1996. They were told this was just a precaution, just for the weekend. They were never allowed to go back. Damage was caused in some places by Pyroclastic flow which incinerates everything in its path, in others by mud and sand swept down by the volcano and volcanic dust literally burying the land. 3 storey buildings now only have one showing, the golf course is buried 6 m deep, the coast at Old Road Bay has moved 200m to seaward, the airport was destroyed. Other damage has been caused just by the jungle taking over again after the houses were abandoned. There is only a third of the original population now living at the north end of the island (many left for U.K. or other Caribbean islands) there is a new airport and a new main port (Little Bay) where we are anchored. A new industry has arisen from the destruction – they are selling sand and gravel collected from where it come down the mountain, huge machines and trucks go about at the empty end of the island and fill ships at the outer end of the old pier. Some people are going back to,restore their homes. As we sailed away down the Leeward side of the island viewing the sights from the water the wind off the land brought a strong smell of sulphur. 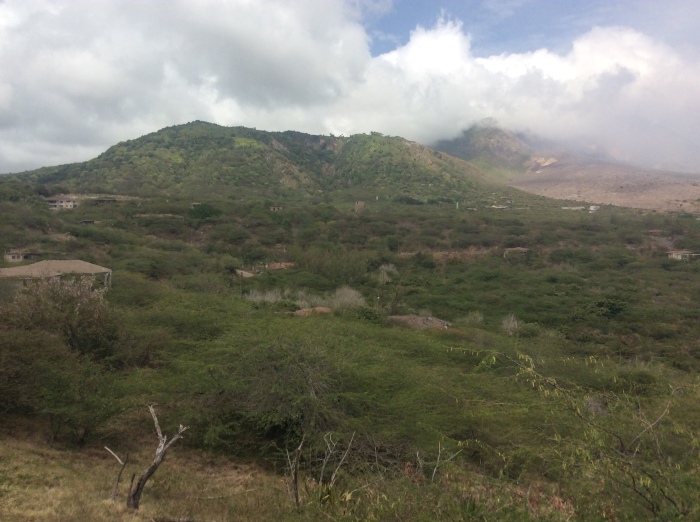 We had a good motor sail to the island of Nevis – but it’s pronounced Neevis, not like our Hill. At 980m Nevis Peak is about Munro height. I was trying to get a photo of the Ben Nevis map (on towel) with the peak in the background. This island is administrated with next door St Kitts, and got independence from Britain in 1983. It was the birthplace of Alexander Hamilton (1757) so we went to see his house and museum, also Horatio Nelson Museum (he spent time here defending against American privateers) and an amazing hot spring by the old Bath Hotel. The main town of Charleston has attractive old Caribbean buildings and quite a good shop – the supply ship had just arrived. Next we made a trip inland to the Botanic Gardens. There are also many old sugar plantations. 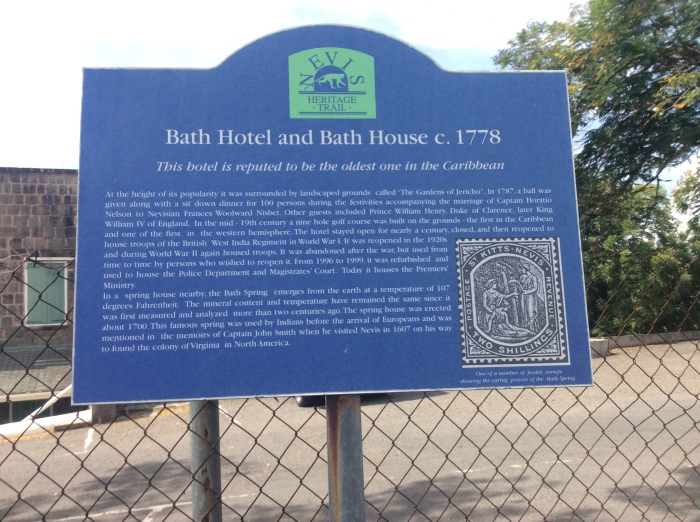