We got a good start, sailing in March for Steve to practise for his Yachmaster instructor update (he did pass of course).  We managed to fix the electric autopilot. – the problem was that the Raymarine smart heading sensor had been left lying In the bottom of the locker by the yard rather than being fixed back on the  bulkhead, and we found that to work properly it needs to be vertical – simple when you know how! An encounter with a fender and bucket with the prop (yes, maybe I should have hooked it faster but also he shouldn’t have driven over it!) meant that we had the boat lifted out a bit earlier than originally planned.  Great weather around Easter meant we worked very hard getting all the outside jobs done, antifouling the keel, polishing the topsides and cabin top, fitting new anodes, new trim strip etc. Just about ready for re-launch when while refitting repaired hydraulic drive for the autopilot we found a problem with the rudder bearings, unexpected as the rudder had been rebuilt in Holland at the time we took over the boat and not detected in the survey carried out in 2014. So new rudder

bearings had to be made and fitted (they dug a big hole to drop the rudder) and the boat had to be ashore for another 6 weeks.

The enforced time ashore meant I was able to varnish most of the interior woodwork.  The weather was too horrible to get anything done outside most of the time anyway.  What with all this and other commitments, Timshel was finally relaunched on 15th June, leaving not much time until our first projected departure date.  We have been plagued by leaks in window and hatches and stupid electrical problems, and it seems to be a case of 1 step forward to 2 steps back. We fixed the Autohelm, but on relaunch found the Raymarine GPS wasn’t working.  We ended up getting a new one but then the GPS of the new AIS stopped working- though this was solved by disconnecting the external aerial and it seems to be fine with internal one.  Then we found the Control display for the Autohelm was  fading – a replacement needed.

Meanwhile, Owens sailmakers had fitted the new spray hood and Bimini both of which look great.  The Bimini seems to do quite well at keeping off the rain as well as the sun. 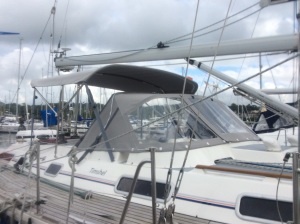 The new Crusader mainsail was delivered 2 July and Malcolm helped us fit it the following Monday 7, just as well we weren’t leaving that day after all.  It came on a huge wooden frame and had to very carefully unrolled and hoisted.

What we have generally failed to allow for is the time to pack up the house and also time for Steve to retire and pack up his office.  We have been madly buying stuff, deliveries coming every day, but at last we are able to start loading it all on the boat.  It must be possible to fit everything in – after all there are only 2 of us on board on a boat that sleeps 6 or 7.  Is the to-do list getting any shorter?