The Savage Islands, nothing to do with Salvage, are Portugese, but are closer to the Canaries (Spanish) than Madeira, the next Portugese territory.  We set off from Ilha Deserta Grande in the morning (Wednesday 23 Sept) without going ashore.  There was thunder and lightning about so the anchorage seemed even more uncertain even though it was calm at that moment so we decided to be on our way.  Shortly afterwards we were hit by a squall of 30 to 40 knots.  This might have been partly due to being in the acceleration zone from the steep island but the wind and the big swell didn’t go down all that much when we were clear.  At the height of the squall the Bimini cover broke loose and the bars folded down on top of Steve at the wheel, so we had to hasten to get that secured and to reef the sails.  Maybe a couple of design mods are needed for the Bimini – a few extra ties to back up the Velcro and a loop so that you can secure the cover from being blown away when you are taking it off.  We ended up sailing the rest of the day and most of the night reefed 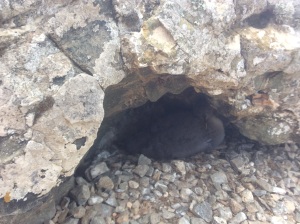 right down close hauled and making only 3 knots or so, as it’s just not worth bashing headlong into big waves.  Things gradually improved, the sea flattened, we could set more sail and the sun came out the next day.  Saw more Dolphins ad we sailed round Selvagen Grande to the anchorage at Enseada das Cagarras, another small rocky bay.  The book says to buoy your anchor as it might get stuck on the rocky bottom.  This all leads to another level of complication and I messed up thoroughly on our first attempt, managing to let ALL our chain out by mistake while messing with the buoy, and when we got it up the bout rope was looped several times round the anchor.

The next attempt was better.  There was already one yacht in, so we were anchored a bit offshore again to be clear of her.  As night fell we were surrounded by very conversational little birds chattering and wheeling about, which turned out to be Corys Shearwaters.

The wildlife wardens did not respond to our call on the VHF, but we inflated the dinghy and went ashore in the morning where we were welcomed by Sandro and Carlos (though they did inspect our permit).  They gave us coffee, showed us lots of information about the island (history, flora and fauna) and fixed one of our oars which had come apart with gaffer tape.  Flycatcher came in while we were with them, and anchored inshore the other boat having just gone (they must think we always anchor out in the ocean).  It was amusing to note how the wardens enthusiastically watch the yachts that come in through binoculars giving a critique of their anchoring technique (of course they would have done the same when we came in).  In fact Flycatcher thought we had the best spot – they had been inspecting the anchored wearing mask and snorkel and reckoned ours was in sand and stones rather than rock.  I was able to swim and inspect ours too and was relieved to see that this was the case and that the buoy line was not tangled up.  The water was beautifully clear, you could see the bottom where the boat was in more than 10m and further inshore out of the swell see loads of interesting fish around the rocks.

Next morning we went ashore and the wardens gave us and Flycatchers crew a tour of the island.  The Corys Shearwaters need here – virtually every whole in the rocks, also in some stone walls, contains a large fluffy chick.  Apparently the eggs are fist sized.  We felt really privileged to be able to visit this remote and beautiful place.  According to our book the wardens sell you T shirts at the end of the tour, but maybe they had run out as there was none of that, nor is there any charge for the permit to visit.  We had to time the launching of the little rubber dinghies carefully to avoid a soaking in the occasional big swell that broke on the slipway.  After lunch both boats set off for Lanzarote.

One thought on “Ilhas Selvagens”