The next leg in the World ARC is Santa Marta to Panama.

We left Santa Marta Columbia in bright sunshine but it was still quite windy and the wind continued to build as we went along. We’d been advised to give the Rio Magdalena a wide berth – apparently a lot of trees and fridges and stuff are swept down and out to sea – somewhere it said 40 miles but this seemed excessive so our waypoint was 20 miles out and in the end we were about 15 miles off. This meant we were reaching rather than directly downwind at first, and everyone went screaming off. We were making 8 knots and more in the surfs, which must be our hull speed, in very big seas. It was a wild fun ride, but as night approached we reefed down and reefed down to get the boat under control so that the hydrovane could steer, more seamanlike with only 2 on board. So we were slower, but we didn’t break anything. One boat found a huge crack in their mast, they hurriedly took down all sail and motored directly to Shelter Bay, Colon. They are hoping they can get it fixed in time to catch up the fleet in the Galapagos. One of the Cats broke her steering chain but they managed to fix it drilling out washers to replace its broken links, another one was complaining about an hour glass – surely they didn’t set the spinnaker in that wind – but apparently it was the screecher that deployed itself, they hadn’t meant to. Wind went down slowly next day and night. With the adverse current we got, realised we would have trouble making the finish at San Blas within the time limit so we were hand steering to try to get best speed. In fact we did get there with 28 min to spare and without motoring but it was getting dark by then so we ended up hove to for the night going into the anchorage at West Hollandes next morning. San Blas were beautiful, you could easily spend months exploring, You need the Eric Bauhaus book, apparently a lot of the charts are not accurate. Our Navionics was not too bad but obviously not quite right, the only large scale British chart is in fathoms! We just visited a couple of anchorages, but some boats went zapping about doing 3 a day, but someone also went aground which prompted everyone else to take more care. We all sailed for a few days, flying Panama flag and Q flag, then went to Porvenir to check in with Immigration. The office has just reopened and we had the guy from World Cruising there to help (who spoke Spanish), it took a while, forms to be filled out in pentuplicate long hand, but eventually our passports got stamped. We went then to Puerto Lindo/Linton Is by the mainland to finish checking the boat in. We visited Portobelo, which had interesting historic ruins but there are a few wrecks from hurricane Otto, then on to Shelter Bay. Pretty amazing to sail in through the big breakwaters, Christobal control obviously had a list and knew who we all were. The Marina is pleasant but quite expensive and they don’t give any discounts. I think they have a monopoly. There is a pool, but the wifi is useless as usual and costs 10US$. We went on a great trip to an Embera Indian Village – you were taken up the Chagres river in dugout canoes – with big outboard engines, also went on the free bus to the mall for shopping.

For the Canal they organised us into two Transit groups and we were in the first one comprising 6 rafts of 2 or 3 boats. It was easy for us as the admin was sorted out by the world ARC rally. The middle boat, often a Cat, as in our raft, does the driving and the two outside ones have the lines and fenders. These were hired for us, 3 big round fenders and 2 long lines per boat. The fenders were new, and the lines were polypropylene about 20mm I think (not 40 as it says in the book). You got measured and inspected beforehand (they check to see the toilet is clean) and each boat gets an advisor. We motored out of the Marina and anchored at the flats to wait for the advisors who boarded from a powerful pilot launch, they did not need a boarding ladder as they stepped down onto our deck. Then we found the plan had changed again and our group was divided in two with both halves going through with a big ship. So we lounged around in the sunshine for the rest of the afternoon, at least it gave me a chance to serve the pasta bolognese I had cooked in advance, going to the Gatun locks as it got dark. But the locks are very brightly lit, we were in the old locks and you could watch a big ship in the new ones alongside being pulled through by the little railway engines. All went smoothly, the advisers were great, ours was called Hastra Alberto. It is true that you need to keep then fed though. And they like Coca-Cola. Andrew on the cat, Laura Dawn, did a great job driving us all, occasionally Steve or Dug on the other monohull were asked for a burst of forward or reverse as well. We borrowed a crew member from Laura Dawn to be our other line handler and Helen did a great job. It seemed easier really than the Crinan Canal especially as you were held in the centre by the ropes and never touched the sides. The boats in the front rank behind the ship must have got some turbulence but not too frightening. After 3 up locks we motored out into Gatun Lake and separated the rafts, shortly we came upon the rest of the fleet tied to two big buoys so we hastily rafted up to them. Apparently it is not advisable to anchor as there is a still a lot of debris on the bottom, trees and stuff, from when the lake was created. Pilot boats took the advisors off (say 21.00) but just a short night as they were back by 1st light at 06.30. Then the long motor across Gatun Lake following the buoys, lots of huge ships going past. We went under the relatively new Centennial bridge, quite spectacular. You just have to do what the advisor says, faster or slower, eventually the rafts were reformed and we went into the down locks, one San Pedro lock, across the small Miraflores lake, then two Miraflores locks, then we are out into the Pacific!    We separated from our “raft” and proceeded under the Bridge of the Americas.

After the bridge, the advisors were taken off, you have to make sure you have fenders in place as it can be rather bouncy, but the driver of the pilot boat was very skilled, then we all headed into La Playita Marina., on the way catching sight of the amazing Panama City skyline with skyscrapers to rival Miami, even a Trump tower. The world ARC people had managed to arrange for berths for all of us in the Marina as it had just been expanded. Very expensive and washroom facilities basic but there is a chandlery and a laundry, the pontoons are good and you can get diesel and gas, no European electricity though. Next morning we were dismayed to find that something had got into the cabin and taken some bread (and left a lot of crumbs). Turned out to be a raccoon we think – the boat next door saw one getting at their rubbish in the cockpit.

So we have been on a tour of the city, the new one, the old one and the ruins of the very old one that was destroyed by Henry Morgan in 1671. Just now waiting for the Volvo people to come and the 1st 50 hour service on our new engine, ruinously expensive, over 500$US but we have to have it to get the stamp in the book for the warranty. Once that is done and we have done washing, shopping (last shops for 4000 miles apparently the Shopping mall in Panama city is the biggest in South America), filled fuel etc we will sail to the Las Perlas islands then to Galapagos. 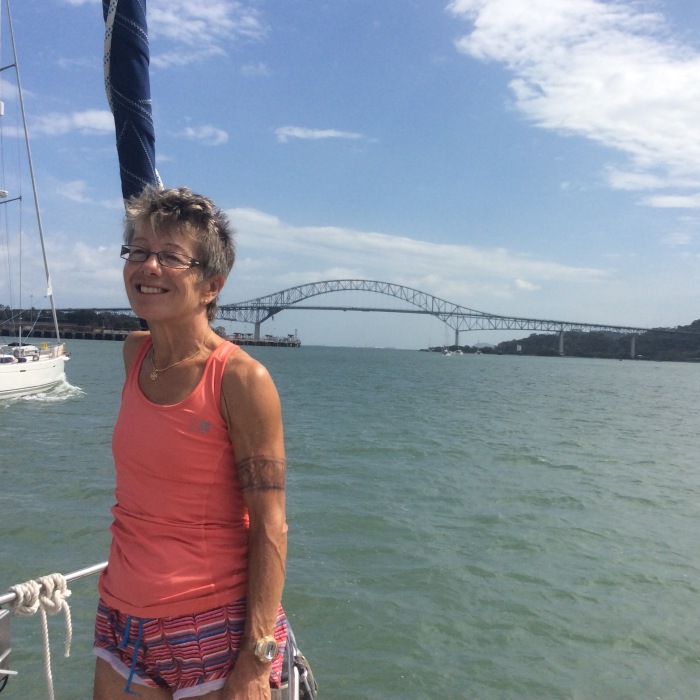